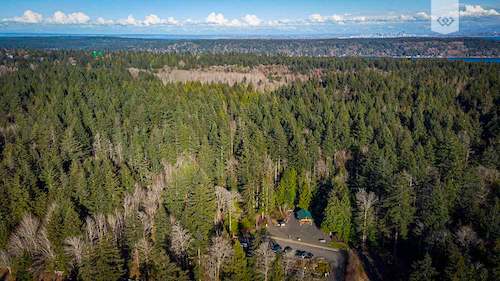 In the middle of the most densely populated area of Kitsap County lies the Illahee Forest Preserve. With over 500 acres, it is a wonderful place to enjoy our area’s natural beauty. Inside this quiet forest oasis, you’ll see Douglas Fir, Red Alder, Maple, and Western Red Cedars providing homes to wildlife, including 55 bird species.

Native Americans first called the forest “Illahee” meaning earth or ground. They saw the area as a place to rest and many others have for decades. However, this park was hard-won by active community members, and it has become a local gem, thanks in large part to the East Bremerton Rotary Club.

For decades, real estate developers and timber companies targeted Illahee for its valuable land and natural resources. In the 1930s, much of the original forest was clear cut except a 275-year-old Douglas Fir and Western White Pine. Over the years, Illahee was proposed for sale three different times for housing development (1978, 1987, and 1996). But each time the community rose in defense of the forest. In the face of opposition, Audrey Boyer, a long-time resident, led the charge to preserve the forest. Fortunately, Boyer’s former student, Frank Chopp, was the Washington State Speaker of the House of Representatives at the time. 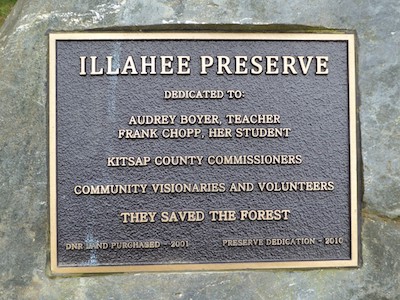 In 2004, Vic Ulsh, an East Bremerton Rotarian, wanted to help preserve Illahee. So, East Bremerton Rotary adopted Illahee Preserve as a project. They developed a plan and created multiple restoration projects. “It’s really a grassroots effort to take care of it,” says Ulsh. “When budgets get tight, parks get cut. They probably have half the staff that they had a few years ago. But volunteers have come together to manage it.”

Another involved Rotarian is Joe Stevick, who is one of our Windermere Brokers. “Having such a mature forest in the middle of Bremerton always intrigued me. I was fortunate to be able to get involved through Vic,” says Stevick. He grew up near the preserve, has always loved it, and has a background in environmental science.

The East Bremerton Rotary Club has updated and improved it in many ways. Now when you visit, you’ll see three signs at key entry points leading into the preserve. You’ll also see a beautiful public picnic shelter. That’s all thanks to our Rotarians. In 2017, they raised $35,000 for the shelter’s construction. 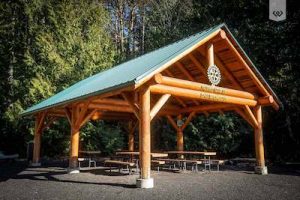 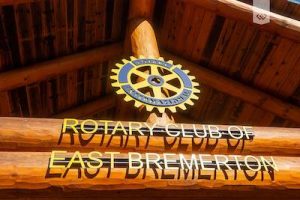 “The evolution of the area has been so interesting,” says Stevick. “I remember when people used to rip around on dirt bikes or play paintball in the forest. With people like Vic and our East Bremerton Rotary Club helping, it really puts structure to it, and it’s much more of a preserve – raw nature with less of a human impact apart from the trails. The work put into it has really transformed its image.”

“It’s taken constant efforts and very dedicated people to change the perception in the last ten years,” says Vic Ulsh. Now, you’ll often see families and joggers out on the trails. “The most common goer is a single woman with a dog,” says Stevick. “That’s a complete contrast to what it was, and it has changed the face of the space.”

“What I love about the preserve is that it is an easy escape into a beautiful PNW forest that is right in your backyard. There are a variety of trails for everyone. When you walk into the preserve you leave the world behind, breathe in the beautiful surroundings, and experience the calming effect that only nature can give you,” says Windermere Silverdale’s Branch Manager Nancy Mackleit. 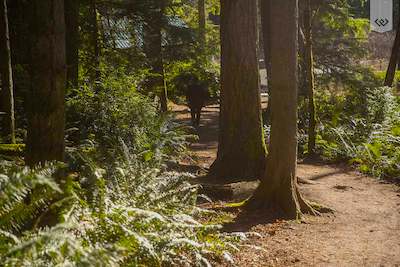 Many groups now engage in community service projects at Illahee Preserve. In fact, one recurring project involves the Navy and another involves the Washington Youth Academy’s cadets. These cadets are at-risk teenagers and community service is part of their curriculum. East Bremerton Rotarians serve as mentors and guides through work parties at the preserve, which also involve dedicated volunteers.

If you’d like to get involved, you can subscribe to the East Bremerton Rotary’s bulletin to receive information about upcoming events and projects. In addition to their work with the Illahee Preserve, these Rotarians work on many other local and international projects.

Through Rotary’s consistent, hands-on involvement and financial support, as well as the efforts of countless volunteers, the Illahee Preserve is now a point of pride. We highly recommend that you explore this lush forest. When you do, it’s easy to see why so many people have fought for it. There’s so much to appreciate about this well-maintained, serene place.

Related Articles
Community 9 Ideas for Indoor Fun in Kitsap County & Beyond It may be winter, but there are still great ways to enjoy a fun day with kids, a night out with friends, or a unique date night. Indoor fun abounds in Kitsap County and beyond with tons of events, venues, and activities. Discover something new below! Live Community Theater in Port Gamble, Bainbridge Island, Bremerton, […]
Home Delicious Summer Recipes Using Local Produce When driving through different parts of Kitsap County, you are sure to see farms tucked into neighborhoods and historic barns hiding behind the trees. We have urban farmers, multi-generational farmlands, and a plethora of farmers’ markets. One thing Kitsap is not short on is delicious, healthy, locally-grown food. Here are some fun recipes using local […]
Community Events in Silverdale & Bremerton to Enjoy Every Year Central Kitsap is the most populated part of the county and hosts many great festivals, kid-friendly activities, and more. These annual and recurring events in Silverdale and Bremerton highlight some of the unique ways our community comes together to connect and celebrate. Annual Events in Spring and Summer Photos with the Easter Bunny Two Weeks […]